At KidsRights the children define the agenda and ensure that their message is reaching a global audience.

KidsRights is one of the most innovative NGO’s in the world. Founder and Board President Marc Dullaert created a way to let children’s voices be heard by a massive audience. He changed a traditional NGO into a world movement to promote children’s rights by initiating the Children’s Peace Prize. All Children’s Peace Prize winners have shown a remarkable commitment to combating problems millions of children are facing worldwide. Among the winners is Malala Yousafzai, the Pakistani girl who became a symbol of courage when it comes to promoting children’s rights on education.

Founder Marc Dullaert: “In 2003 I was filming a documentary about the devastating trade in blood diamonds in Sierra Leone. We were in neighbouring country Guinee Bissau, and we were stuck in the middle of nowhere with severe car damage, so we were forced to sleep in the car. I woke up by the desperate sound of a person that apparently was in trouble. It happened to be a mother who was trying to reach a refugee camp in Sierra Leone. Unfortunately, she was too late, because her child had just died in her arms. I felt powerless, angry and restless at the same time. For me, this was another example of how children become a victim of this crazy adult world. On my way home I came up with the idea to start an NGO and make sure these children’s voices are heard. This was the beginning of KidsRights. My wife, a designer artist, immediately embraced the initiative and created the logo for the organization”. 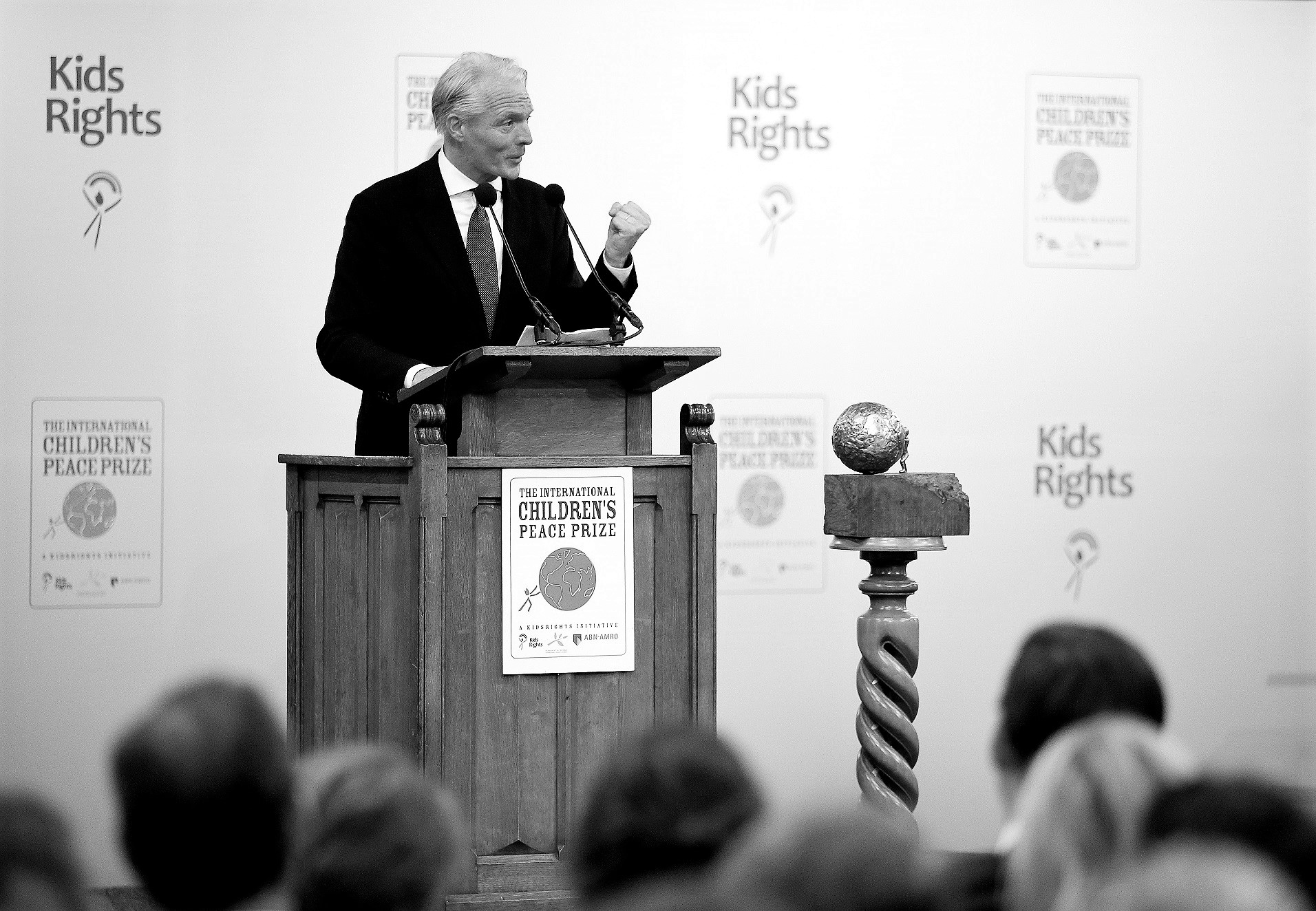 We started in South Africa, an area that I was familiar with and where we supported projects to protect children from the HIV/Aids epidemic that was enormous in those days. It didn’t take long before we also worked in other countries and continents. Because the NGO world was not new to me, we successfully raised funds from private sponsors and corporates and established partnerships with other organizations”.

A Peace Prize for Children

“In 2004 I was watching the announcement from the Nobel Peace Prize winner. The same night me and my wife watched a documentary about a Pakistani boy who worked as a carpet worker all his young life. He was very articulate and decided to stand up for his rights and courageously sought support for his ideas. When we saw his story, we both thought that in fact, he was a Nobel Prize winner too! Soon afterwards I reached out to the Nobel Prize committee and shared my idea to initiate a Children’s Peace Prize. Although I got positive and polite feedback, it became clear to me that Nobel’s vision and mission did not allow the committee to extend the prize to children. However, I managed to arrange a meeting with Michael Gorbachev, chair of the Nobel Peace Laureates World Summit, which turned out to be a life-changing moment.

It was the strong connection that I had with him that opened a door. When I asked him about his children and grandchildren, we immediately had a deep and meaningful level of discussion. I went home, and I strongly felt that I went not completely empty-handed. I knew that I had the first ambassador on my side. With Gorbachev's support, we managed to have other Nobel Peace Prize laureates enthusiastic for the idea, of which Desmond Tutu became our strongest advocate and patron over the years. 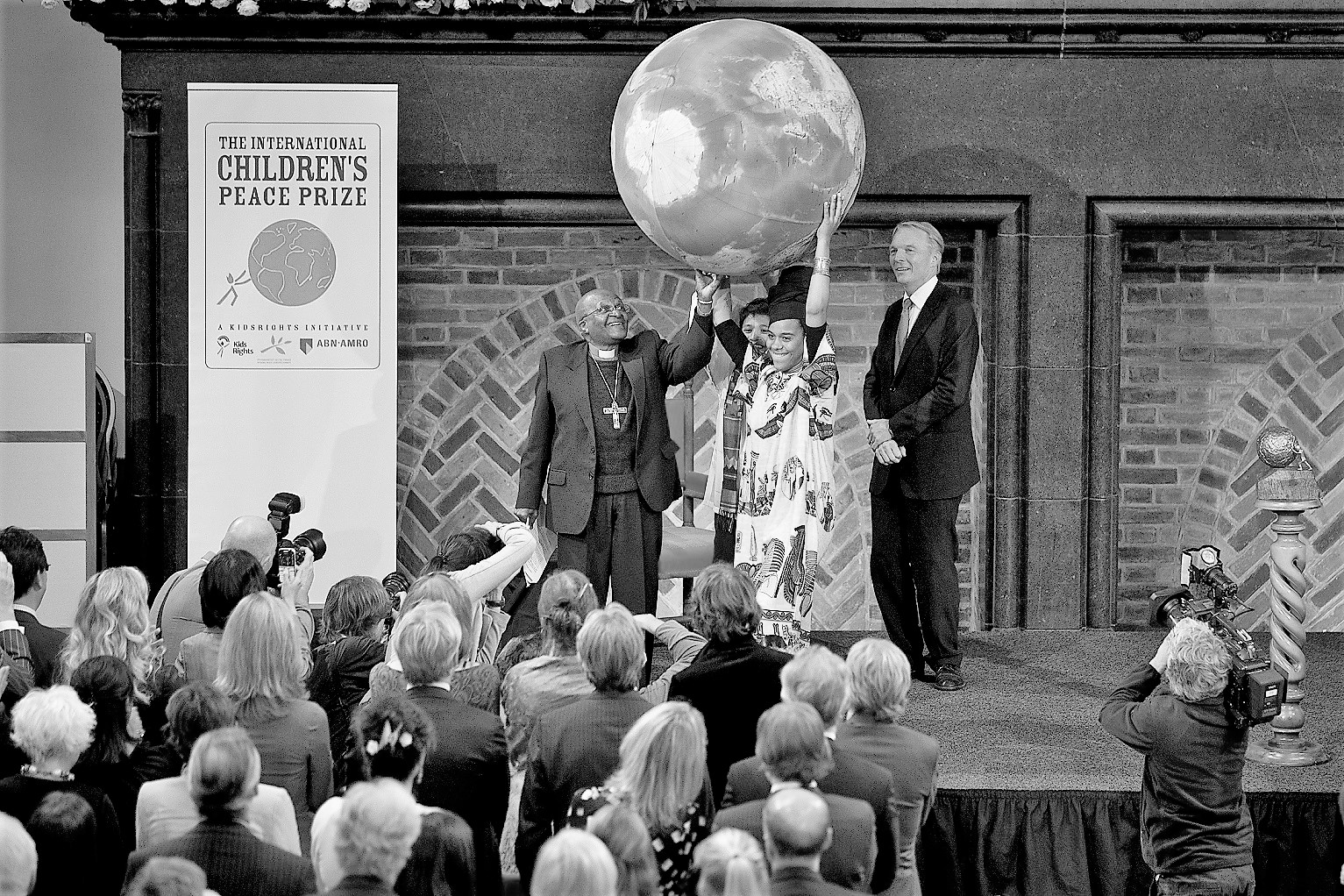 A jumping board to the Nobel Peace Prize

“The idea got wings. KidsRights managed to have the first Children’s Peace Prize ceremony in The Hague, the international ‘peace city’ in the Netherlands. I got permission from the Dutch government to have the ceremony take place at the prestigious Hall of Knights. The first prize was for late Nkosi Johnson, a South African boy and Aids victim who impressively helped to eliminate the stigma around the disease. The impact was huge. The event was broadcasted in every corner of the globe, and the message from Nkosi reached a global audience. The initiative encouraged organizations and people from all over the world to nominate children with outstanding advocacy skills to become the next winner. One of them was the headmaster of the school in Swat Valley in Pakistan who nominated Malala Yousafzai for her work on promoting the right to education for all children, despite the life-threatening risks that she was running by the Taliban. For her courageous work, she obtained the Children’s Peace Prize in 2013. A year later she also became the youngest winner ever of the ‘adult’ Nobel Peace Prize.

The tenth anniversary of the Children’s Peace Prize in 2014 became a special one. The Hall of Knights was filled with young and old leaders from all over the world, including the King of the Netherlands. Also, a new initiative was born. Our patron Desmond Tutu, one of the key players in The Elders organization, co-announced the start of the pendant for the future: The Youngsters. This group of Children’s Peace prize laureates symbolize a strong statement to the world: we are not just a one-time winner, but join forces to put children’s rights even stronger on the world agenda. It is great to see the group of winners are united in the Youngsters and created a movement with an even stronger impact. 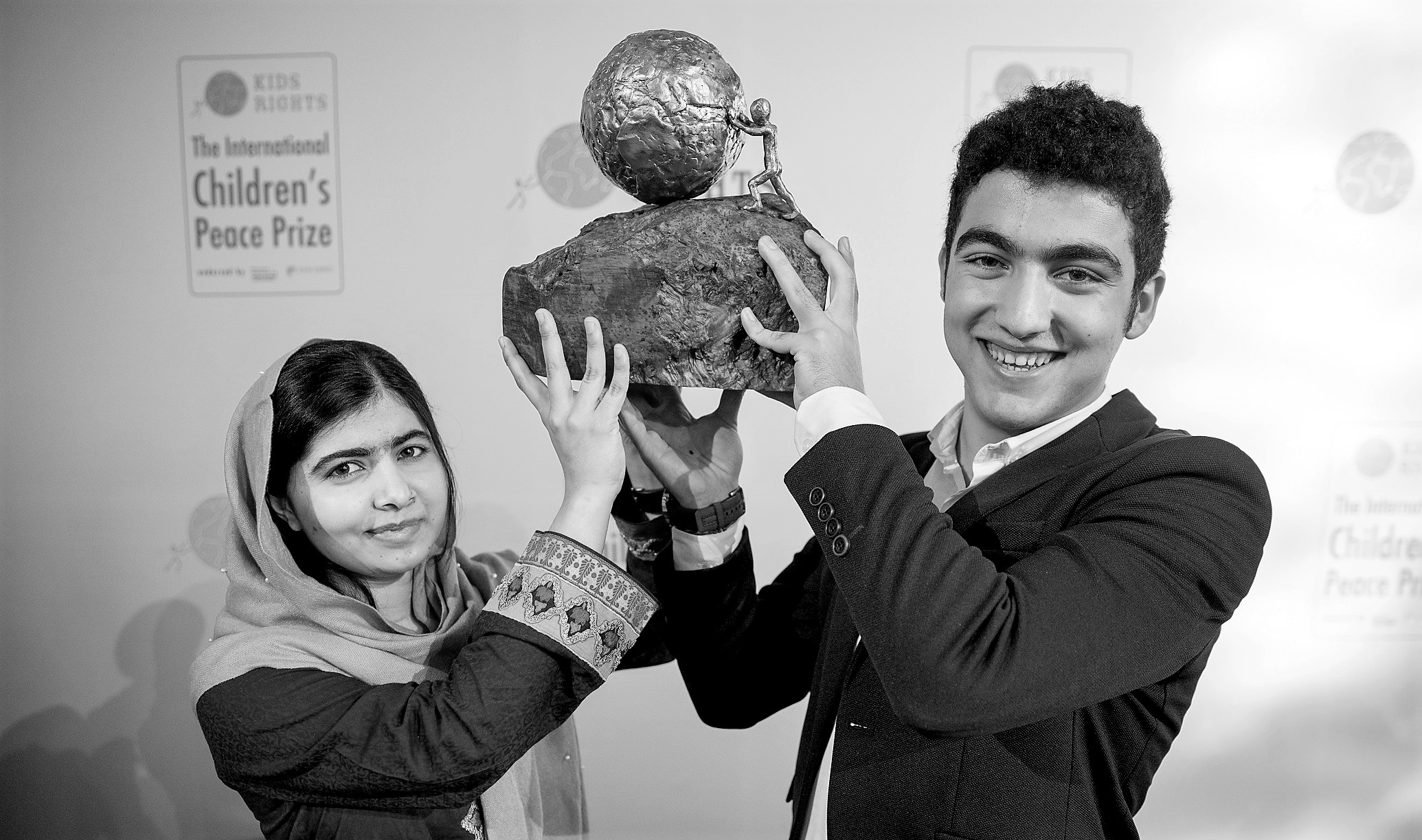 They were even invited by the King of Jordan to advise on education issues and challenges among the millions of refugees from the Syrian war. This is not by coincidence. 2017 winner, Mohamad Al Jounde is an expert on the topic. He literally built schools and classrooms and started to educate kids in extremely difficult circumstances. Another good news is that his announcement reached an audience of over 150 million people. This strong media impact makes the Children’s Peace Prize ceremony one of the most powerful events to promote children’s rights. The 2018 ceremony took place in Cape Town. The US March for Our Lives initiators, advocates for safer schools without shooting violence, won the prize.

“With about half the world population being younger than 21 years old it is necessary that children and youngsters take part in policy-making. Their voices should not only be heard but also be listened to. Their consultation should not just be a cosmetic one, but governments, policymakers and companies should make it an integral part of their agenda-setting for the future. For sure it will lead to a better, stronger and more inclusive world. Together with Erasmus University in Rotterdam we published the KidsRights Index 2018, the annual global ranking which is issued for the sixth consecutive year. It maps how 178 countries adhere to and are equipped to improve the rights of the child. Vulnerable and marginalized children, including refugee children, migrant children, disabled children, street children and indigenous children, are still widely discriminated against. But we also see progress. The 2018 ranking shows that unfortunately we still see that most countries don’t fully comply with international agreements on children’s rights. The good news is that some developing countries like Nepal, Zambia and Peru are showing increased spending on children’s rights”.

“Our work attracts many private and corporate sponsors. The organization is very lean, and most of the costs are covered by our corporate partners such as ABN AMRO bank, that has been one of the most loyal sponsors since the beginning, but also other international organizations, like law firm Nauta Dutilh. I’m particularly pleased with the fact that it has not remained unnoticed that we reach huge audiences with their messages. US media giant Viacom with the Nickelodeon channel recently became one of the new partners that we are proud of. Last June, we created a Global Changemaking platform. Nickelodeon is broadcasting the messages from the Children Peace Prize winners with their appeal to children and youngsters to become a “Changemaker” in 182 countries”.